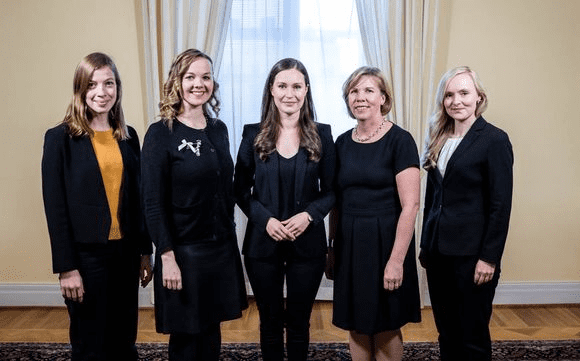 Sanna Marin is the latest Prime Minister of Finland and she is the youngest PM in the world at the age of 34. Coalision is also formed with five women party leaders – majority of them being under 40 years of age.

Currently, in the cabinet, twelve portfolios are represented by women and only seven by men. Also, 47% of the parliamentarians are women. In that regard, Finland is pretty gender balanced in terms of representation at the government level.

The government being formed by five women raised many criticisms, claiming that such power cannot be entrusted to an inexperienced group of young people. On the other hand, many more people congratulated and applauded the new government for inspiring people and giving hope for creating innovative solutions for a better future.

“ Equality is no silo, no single sector, but equality is something that happens when it is taken into account in all walks of life and policy” – PM. Sanna Marin

Finnish government is currently working to advance and promote gender equality, starting with a more equal split of domestic responsibilities. For example; parental leave reform has been activated recently to provide equal parental leave to ensure that fathers take over some of the mothers` share in child care.

Still, the government is working on an Action Plan for Gender Equality to ensure gender pay gaps or violence against women disappears entirely, and there is a lot to do on even share of houlsehold responsibilities and child care.

“Nordic Welfare societies are egalitarian, because they understand how broad a concept equality is and that it requires action in all policy sectors.” PM. Sanna Marin

In addition to national work planned, the government believes that gender equality should be promoted on both EU level and globally. Recent developments in the world, such as pandemics and the fall of democracies, have proven that no achievements are permanent or to be taken granted, therefore the government intends to keep fighting for equality at every level they can.